A full-size mock-up of the next generation of rolling stock for the Brussels metro has gone on public display as part of the WeAreMobility exhibition, which is being held alongside the Brussels International Motor Show at the Brussels Expo. 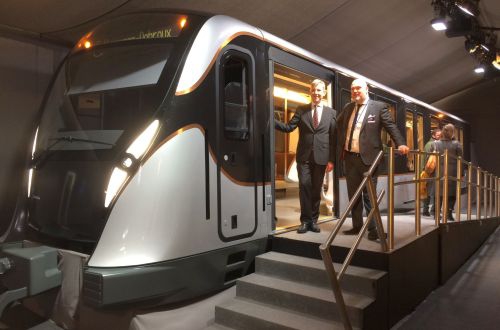 Brussels Transport Company (Stib) awarded CAF a 12-year framework contract worth €353m in August 2016 for 43 type M7 metro trains, with an option for a further 47 sets.

The M7 has been styled by Antwerp-based designer Axel Enthoven, who also worked on the design of the Bombardier type 3000 and 4000 Flexity Brussels trams and the type M6 metro trains.

The first sets from the initial tranche of 22 trains for lines 1 and 5 will be delivered in 2019 and the fleet will be maintained at Stib’s new Erasmus depot. The trains will enter passenger service at the end of 2019, enabling Stib to reduce peak headways from 2min 30 sec to 2 minutes, boosting capacity on the West Station – Mérode section from 16,500 passengers per hour per direction to 21,500.

In addition, the M7s will also be deployed on the future Line 3 and expansion of the fleet will enable Stib to reduce minimum headways on lines 2 and 6 from 3 minutes to 2min 30 sec.

The WeAreMobility exhibition continues until January 21. The mock-up will then be transferred to the tramway museum in Woluwe-Saint-Pierre, where it will be on public display.