A groundbreaking ceremony was held on April 12 to mark the start of construction on Montreal’s Metropolitan Electric Network (REM), the new 67km automated light metro for the Canadian city. 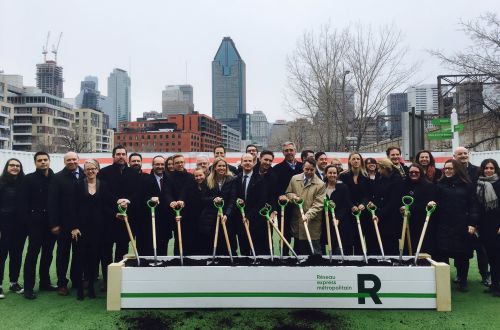 The ceremony was attended by representatives of CDPQ Infra, which is developing and majority funding the $C 6.3bn ($US 5.01bn) project, and from the governments of Quebec and Canada, which are each providing $C 1.28bn, the City of Montreal, and the selected consortia. The new network will have 26 stations and is billed as the largest public transport project in Montreal for 50 years.

Both contracts were awarded on February 8, and since then the two consortia have worked to successfully align their respective proposals and schedules for the project. Alstom confirmed that it will supply 106 two-car Metropolis metro trains for the project as well as its Urbalis 400 driverless CBTC solution, Iconis control centre, platform screen doors, Wi-Fi, and 30 years of operations and maintenance services. Alstom’s share of the $C 2.8bn RSSOM contract is $C 2.2bn, with SNC-Lavalin receiving $C 600m.

The new double-track network will connect Brossard Rive-Sud in the east via downtown Montreal where it will connect with the existing Montreal metro, to Deux Montagnes in the west and Sainte-Anne-de Bellevue in the southwest, with a branch to Montreal Airport, which is not currently served by rail.

Testing is expected to begin by the end of 2020, and the first passengers will use the service in the summer of 2021.

“With this groundbreaking, thousands of people will soon be on site to build one of the world's largest automated transport systems right here,” says Mr Michael Sabia, president and CEO of CDPQ. “With $C 4bn in Québec content and the creation of 34,000 jobs during construction, the REM will generate significant economic benefits for the economies of Greater Montréal and Québec.”

An interview with Macky Tall, which includes a full project description, is available in the August 2017 edition of IRJ (p20), or by clicking here.