MOSCOW Metro has unveiled the first of its new fleet of Moskva-2020 metro trains, with Moscow mayor Mr Sergei Sobyanin one of the first people to ride the new train during the inaugural journey on October 6. 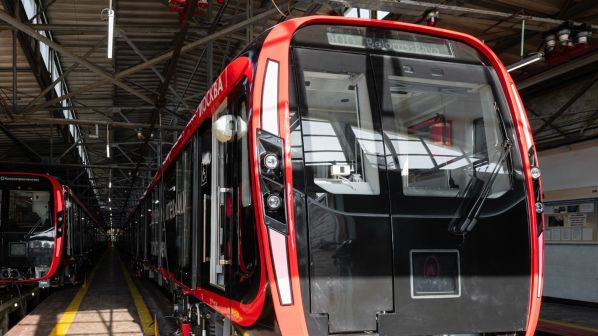 Photo Credit: Press Office of the Mayor and Moscow Government

The train travelled from Krasnaya Prenya depot along Line 5/Koltsevaya to Belorusskaya station.

The train is the first of a fleet of 170 trains, comprising 1300 cars, which will be manufactured by Transmashholding (TMH) subsidiary Metrowagonmash (MVM). MVM was awarded the contract under the condition that the first train was delivered by October, following the announcement of a tender in June 2020. The first train since has passed certification and acceptance tests, as well as completed a test run.

The full fleet is scheduled to be delivered by 2023, and will be used on Line 5/Koltsevaya, Line 6/Kaluzhsko-Rizhskaya and Line 11/Bolshaya Koltsevaya.

The new trains feature significant improvements to accessibility for passengers, with door widths increased by 15% to 160cm, as well as open gangways. The trains will also feature powered sliding doors equipped with passenger safety systems and larger windows than previous models, and be around 15% quieter than Moscow’s older metro fleets.

The train will also include an upgraded driver’s cabin, which will be equipped with touchscreen consoles, with access to the train’s control and traffic safety systems secured through a system of unique access cards.

“We started to renew the Metro’s rolling stock in 2010 and now we have some of the youngest rolling stock among the world’s metros,” Sobyanin says.

The average age of Moscow Metro rolling stock is currently 15 years. However the metro plans to reduce this to just 10 years by 2023. This follows a radical programme of modernisation which began in 2010, and has seen 60% of the network’s total rolling stock upgraded, including the purchase of 832 Moskva metro cars in February 2014. An additional 80 cars were later purchased.