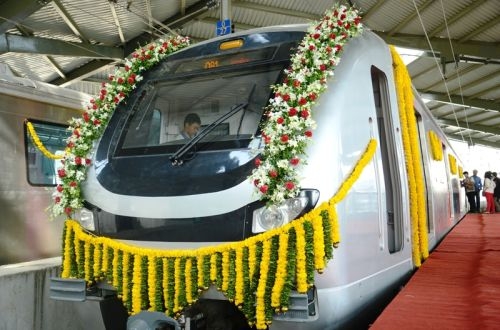 Built at a cost of Rs 45bn ($US 762.7m), Line 1 is being implemented by Mumbai Metro One, a consortium of Mumbai Metropolitan Regional Development Authority (MMRDA), Anil Ambani-led Reliance Energy and Veolia Transport.

The 12-station line is expected to carry 1.1 million passengers per day – approximately 14% of the 7.5 million daily commuters which use Mumbai's suburban network– and offers an end-to-end journey time of 20 minutes compared with 1h 30min by road.

CSR Nanjing has supplied 16 trains for the line which can accommodate around 1500 passengers and operate at 3min 30s headways between 05.00 and 00.00. Siemens supplied signalling and Thales provided the line's telecommunications system. ABB supplied the 25kV ac power system as well as Scada and E&M systems.

With the line preparing to open, controversy emerged over the fare structure, which is yet to be resolved. The MMRDA – which comes under the Congress-led Maharashtra government – has continued to oppose moves by Reliance Energy to raise fares from the Rs 9-13 level outlined in the concession agreement. Mumbai Metro One has set a promotional fare of Rs 10 for the first month of the service and Chavan, who threatened to boycott the inauguration over the issue, says that the matter is now in court.

Opening of the metro line comes after the city inaugurated India's first monorail between suburban Chembur and Wadala on February 1. Mumbai also plans to develop the Charkop - Bandra – Mankhurd Line 2 and Line 3 from Santa Cruz to Bandra, City Centre and Cuffe Parade, although these projects, like Line 1, have suffered delays. Line 2 is currently entering a re-tendering process, while Line 3 is now not expected to be completed until 2020.