Extensions to lines 2A and 7 enable Mumbai metro to introduce a through service on both lines. 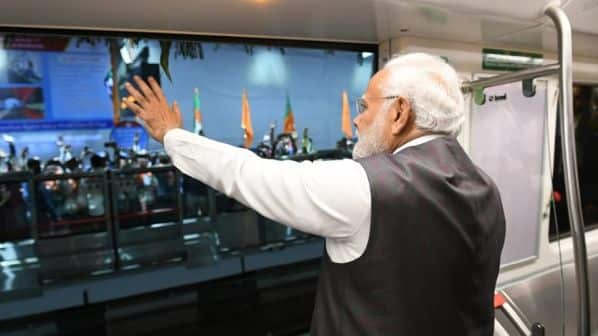 The Line 2A extension runs from Andheri West to Dahanukarwadi with seven stations and connects with the 9.5km Dhanukarwadi - Dahisar East phase of the line, which opened in April 2022. The Line 7 extension has four stations and runs from Aarey to Gundavali, connecting with the 9.75km Dahisar East - Aarey section, which also opened in April last year.

The lines run alongside the Link Road and the Western Express Highway, two important roads in Mumbai. Together the lines 2A and 7 are expected to carry 400,000 daily passengers initially, reducing average travel times between stations by around 35%. The lines are served by 22 six-car trains built in India by Bharat Earth Movers. The trains have a design speed of 70km/h, and carry 2280 passengers each, operating at 10-minute intervals. Future conversion to driverless operation is envisaged.

Mumbai Metropolitan Regional Development Authority (MMDRA), which is overseeing construction of the city’s metro network, which will eventually comprise 14 lines totalling more than 300km, expects several other metro lines to be completed in the next two years.

The first phase of Line 2B, the DN Nagar - National College section of the 23.64km line, which is a southern extension of Line 2A from DN Nagar to Mandale, is targeted for completion in 2024. The Chembur - Mandale second phase is expected to follow in June 2025.

Excavation of the 54.5km of tunnels required for the 33.5km Line 3 (Aqua), the city’s first underground metro, was completed on November 30. The line will connect Cuffe Parade in the south of Mumbai with Bandra Kurla Complex (BKC), the international airport, SEEPZ and Aarey Colony with 27 stations.

The project is costing $US 3.8bn and completion of the first phase from BKC to Aarey is envisaged this year, while the second phase will be completed in 2024. Alstom is supplying 31 eight-car trains under a €415m contract, the second of which arrived at the end of December, and is being trialled on a 3km section between Marol and Aarey. A tender to operate the line is also expected in due course.

In addition, a joint venture of Systra and DB Engineering & Consulting were awarded the general consultant contract for the 9.2km Line 10 from Gaimukj - Shivaji Chowk and the 20.7km Kalyan - Taloja Line 12 projects at the end of December. The appointment is expected to accelerate development of these schemes.

MMRDA is also planning to construct the 35km Line 8 to connect CSIA with the Navi Mumbai International Airport.

For detailed data on metro projects in India and from around the world, subscribe to IRJ Pro.