THE first sod was cut on April 5 for a €3.84bn 10-year project to build a second east-west S-Bahn line under the centre of Munich to relieve congestion on the parallel existing line. 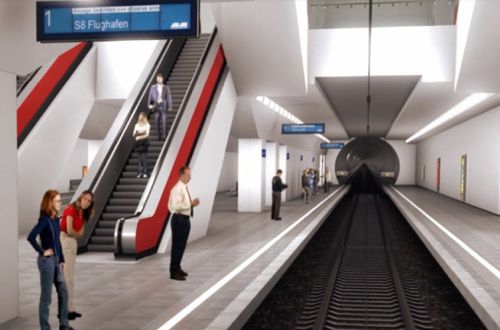 Artist's impression of one of the new stations.

Under an agreement reached in October 2016, the German federal government will contribute around €1.5bn to the project through the Municipal Transport Financing Act (GVFG), with €1.4bn coming from the state of Bavaria, €155m from the city of Munich, and €150m from German Rail (DB). Any additional costs will be divided on a 60:40 basis between the federal and state governments.

The project, which has taken 16 years of planning, will be implemented by Germany’s infrastructure manager DB Networks and is due to be completed in 2026.

The 7km twin-bore underground line will run from a point between Leuchtenbergring and East Station in the east to the west of Donnersbergerbrücke with new stations at East Station, Marienhof in the city centre and Munich Main Station. Additional tracks will be constructed to Leuchtenbergring and from Donnersbergerbrücke to the west of Laim. The tunnels will be up to 40m deep because of the need to pass beneath existing U-Bahn lines. The total length of new construction is around 10km.

The original east-west cross-city S-Bahn line opened in 1972 and was designed to transport 250,000 passengers per day. However, traffic has soared since then and the line in now carrying 840,000 passengers on weekdays, more than three times its design capacity.

The new line will reduce journey times as there are fewer intermediate stations than on the existing line. It will also allow the introduction of 30-minute-interval express services to Munich Airport and destinations beyond the current S-Bahn network including Landshut, Mering, and Mammendorf. In addition, the frequency of existing S-Bahn services will be stepped up from a train every 20 minutes to one every 15 minutes.

The new S-Bahn line is shown in red and existing S-Bahn lines in green.