A new metro line has been proposed to serve a new artificial island in Copenhagen harbour, which would also provide additional services through the centre of the city. 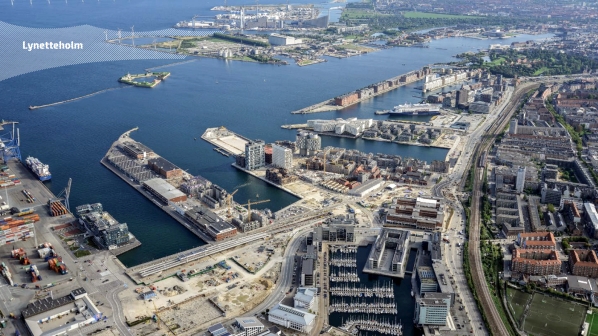 The island served by the new line will sit at the entrance to Copenhagen Island.

Lynetteholmen Island is a proposed development that will provide additional land at the mouth of the harbour with space for 35,000 new homes, with at least 20% earmarked as affordable rental housing for students and lower earners. The island would serve three purposes:

The project, which is expected to begin construction in 2022 with the perimeter piling, will require the development of new infrastructure to serve the area. This includes a new metro line, with three designs proposed:

The cheaper M4 extension has already been dropped as it would share tracks with the M3 and M4 lines through the city centre and would not provide the required capacity. It would also not increase capacity across the harbour to relieve the overcrowded M1 and M2 lines during peak periods.

The M5 West, although slightly more expensive than the M5 proposal, is favoured as it crosses the harbour twice, will attract twice as many daily passengers and will generate more revenue to compensate the increased cost.

The line, which will have 11 stations, is expected to cost DKr 20.4bn ($US 3.2bn) and will provide services for the 78,000 people who are expected to live, work and study within walking distance of the line by 2035.

In addition to the new metro line, a new eastern by-pass road will run through a tunnel from Nordhavn via Lynetteholmen and Refshaleøen along the east coast of Amager Island before joining the motorway network by the airport.

The preliminary study into the transport connections was published by Ministry for Traffic and Housing, working with the Copenhagen and Frederiksberg municipalities, Copenhagen metro operator Metroselskabet and the Danish Road Directorate. The study will provide the basis for the political approval of the project and a financial plan, which is expected later this year.