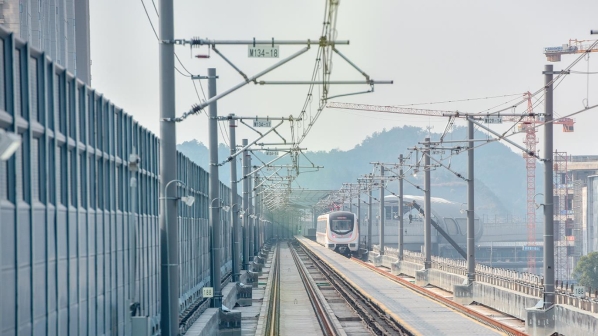 Line 16 has 12 stations, including four elevated. The line begins at Jiuzhou Street station on Line 5 and terminates at Luting Road Station.

Services are operated with four-car 120km/h type B metro trains, which operate at average speed of 60km/h, making Line 16 Hangzhou metro's fastest line. Services will operate at nine minute intervals between 06:10 and 22:33.

Two extensions have also been added at either end of Line 5. A western extension runs 6.5km from Liangmu Road to Jinxing while the line has been extended by 31km from Shanxian to Guniangqiao, taking the total length of the line to 56.21km. The underground line now has 39 stations including 19 interchanges. The eastern extension connects with lines 1, 2 and 4. The maximum running speed of the line is 80km/h.

Tracklaying began earlier this month on Line 6, which will run 23.5km with 12 stations from the city centre to Fuyang District in the southwest. The line is scheduled to open by the end of the year.