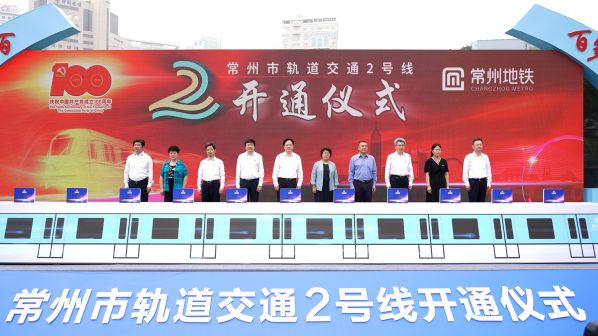 NEW line openings in the broader Yangtse river delta area in recent days have added significantly to urban rail connectivity in the region.

The city of Shaoxing, to the southeast of the provincial capital Hangzhou and famous for its potent rice wine, opened its first metro line on June 28. The 20.3km Keqiao section of Shaoxing metro line 1 between Guniangqiao and Zhongguo Qingfang Cheng has 10 stations, four of which are elevated and six underground. Six type B metro trains with a maximum operating speed of 100km/h are offering an end-to-end journey of 26 minutes, with departures between 06.00 and 23.00 daily.

The line is one of two included in the Shaoxing Urban Rail Network Plan of 2013, the full length of which will extend 33km including a five-station branch at the northern end. Construction of the current section was approved by China’s National Development and Reform Commission (NDRC) in May 2016 and started in February the following year. There is a depot at Wanxiulu and stabling at Jianhu.

In the provincial capital, the 17km east-west Hangzhou metro Line 8 also opened on the same day. The line has seven stations between Wenhainanlu and Xinwanlu, and passes beneath the Qianjiang river. Six-car type B sets operate the line, serviced at a depot at Xinwanlu.

On the same day in the southern part of neighbouring Jiangsu province, Changzhou's 19.8km, 15-station (14 underground, one elevated) east-west Line 2 opened, whilst phase 1 of Xuzhou metro Line 3 in the north of the province also opened. In Changzhou, services extend between Qingfeng Gongyuan station in the northwest of the city to Wuyilu station in the east, operating between 06.00 and 22.00 each day using six-car type B sets. Xuzhou's new north-south 18.1km line is entirely underground with 16 stations between Xiadian station in the north and Gaoxinqunan station in the south, and is operated by four-car type B sets from CRRC Puzhen. The line's stations are built to accommodate six-car trains in the future.

On June 29, Suzhou metro Line 5 opened, taking the total length of the metro in China's famous garden city to 210km with 169 stations. The 44.1km line runs broadly southwest to northeast from Taihu Xiangshan to Yangchenghunan via 32 intermediate stations, nine of which offer or will offer interchange. CRRC's Nanjing Puzhen has supplied the six-car type B trains.

Elsewhere, in northwest China, the complete 43km Xi'an metro Line 14 opened on June 29, following the completion of the 13.7km, eight-station eastern section from Beikezhan in the northwest to Heshao in the east, adding to the 29km Beikezhan to Xi'an airport section that opened in September 2019.