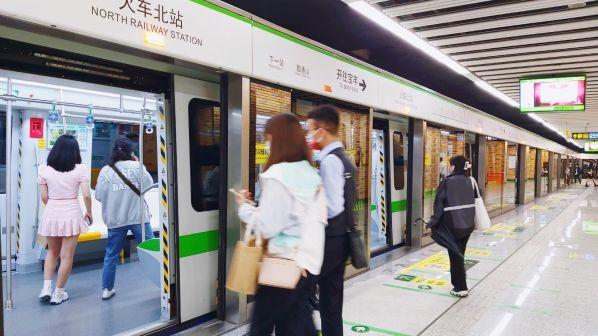 LINE 5 of the Kunming metro in China has entered service, running for 24.5km from World Horti-Expo Garden in the northeast of the city via Kunming North railway station and the city centre to Baofeng in the southwest.

The route has 22 stations and runs completely underground. It was built over a period of five years by China Railway Construction Corporation (CRCC).

Kunming in Yunnan province is known as “the city of eternal spring” due to its temperate climate, and green is the colour predominating in both station décor and rolling stock design on Line 5.

Each station on the route has a room for use by breast-feeding mothers, while advertisements are projected onto the tunnel walls along the route using a high-definition imaging system.

Line 5 is operated with a fleet of six-car trains with capacity for up to 2094 passengers each, with a maximum speed of 80km/h.

The new trains are equipped with lithium titanate batteries as an auxiliary power source, that can provide emergency traction power over distances of up to 2km.

The Line 5 trains are the first metro vehicles to be built locally in Kunming by CRRC. The CRRC Kunming plant has been assisted by CRRC Zhuji, which had provided technical and project management expertise.

In Hunan province, metro Line 6 has been opened in the city of Changsha, running for 48.1km from Airport to Xiejiaqiao.

CRRC Zhuzhou has supplied a fleet of six-car trains for the new line, which operate at up to 80km/h. Each train can accommodate up to 2592 passengers, with wireless charging points provided for mobile phones.