STOCKHOLM Transport (SL), metro operator MTR and Bombardier are making preparations for the introduction of the new fleet C30 metro trains, which are expected to begin trial passenger operation on the Red Line during the autumn. 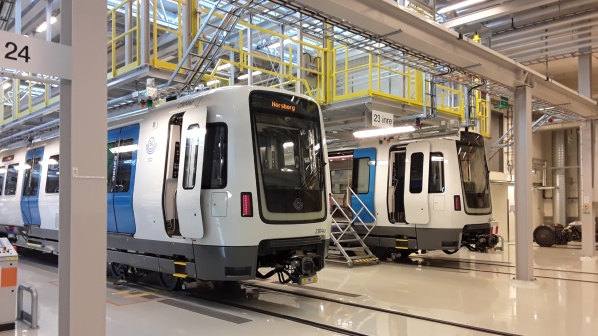 SL awarded Bombardier a SKr 5.7bn ($US 603.7m) contract in June 2013 to supply 96 four-car trains based on the manufacturer’s Movia product platform. The contract includes an option for 80 additional sets.

The delivery of the C30s will enable SL to withdraw its ageing C6 and C14 metro trains.

The 750V dc third rail trains are being assembled at Bombardier’s Hennigsdorf plant near Berlin and delivered to Sweden by rail.

The C30s are equipped with Bombardier’s Mitrac traction system and Orbiflo remote condition monitoring technology. Unlike the preceding generation C20 metro trains, the C30s are not articulated. Bombardier Flexx Eco inboard bearing H-frame bogies have been adopted instead to reduce weight and simplify maintenance. This also enables the provision of three sets of passenger doors per car, which will help to minimise dwell times, and seat pitch has also been increased compared with the C20s. All except the outer two bogies are powered.

The trains are also equipped with sliding plug doors supplied by IFE, Austria, a configuration which was chosen to reduce interior noise.

Each 70m-long four-car train will accommodate 630 passengers (at 5p/m2), including 140 seated. Each car has a multi-purpose area for passengers with pushchairs and wheelchairs.

A full-size mock-up was constructed to test different interior configurations, materials and colours. All electrical and mechanical equipment is mounted in the roof or beneath the floor and there are no cubicles in the passenger area. The train also features full-width gangways to increase standing capacity, enable passengers to move freely through the train and provide an increased sense of security. Each car is equipped with six CCTV cameras.

The integration of “fun features” into the interior design of the train is intended to make the travel experience more attractive.

Three pre-series trains have been delivered to a new purpose-built depot at Norsborg in the southwest of the city. The facility includes an underground stabling yard, which will accommodate 17 140m-long trains. The yard is equipped with mobile cleaning stations to simplify servicing.

The depot is equipped with a jack system supplied by Windhoff, which enables a whole train to be lifted for access to underfloor equipment.

Bombardier says it expects to complete the authorisation process by the end of this month. The pre-series trains will then undergo 5000km of test operation on a test track at the Blue Line depot.

SL expects trial operation with passengers to begin in the autumn. By this stage, six four-car C30s will be available to form three eight-car trains. The final train is due to be delivered to Stockholm in June 2022.

The new trains and depot are part of  broader programme to modernise the Red Line, which also includes modernisation of infrastructure, IT systems, the upgrading of the existing Red Line depot at Nyboda, and the rollout of CBTC. The C30s are equipped to enable operation at Grade of Automation 4 (GoA4) when the CBTC rollout is completed, although no date has yet been set for the introduction of driverless operation.

In addition to the introduction of new trains on the Red Line, SL is refurbishing its C20 trains, which date from 1997-2004 and form the backbone of the Stockholm metro fleet. The work is being carried out at Bombardier’s Västerås facility and is intended to reflect the quality of interior finish on the C30 fleet.