QATAR Rail (QR) received the first two new trains for Doha Metro from an order for 35 from Kinki Sharyo on June 12. 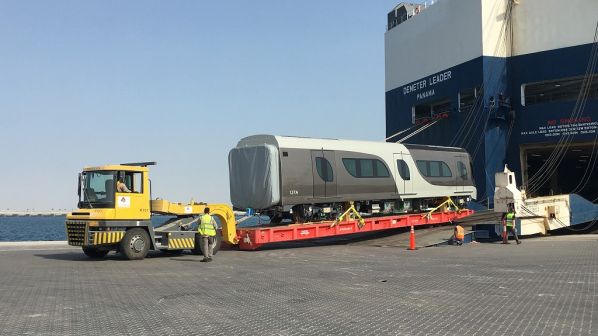 The remainder of 35 new driverless three-car ‘Al Faras’ trains are due to be supplied before June 2021. The new trains will increase the Doha Metro’s fleet from 75 to 110 as the network rapidly expands and will boost capacity ahead of the 2022 football World Cup.

The new trains, which arrived at Hamad Port, will be transferred to the Qatar Rail Depot in Al-Wakra for assembly and testing before beginning operation on the metro system.

The metro, which began operations in May 2019, has three lines comprising 76km and 37 stations as of December 2019. The network, estimated to cost Riyals 131.1bn ($US 36bn), is targeted for completion in time for the 2022 World Cup, which is expected to attract over 1.5 million visitors to the country.

“The Doha Metro network provides a reliable and comfortable means of transport within the city,” says Mr Abdullah Abdulaziz Al-Subaie, managing director and CEO of Qatar Rail. “The additional trains will undoubtedly boost the network's capacity on all the lines and will contribute to achieving the project’s long-term goals of expanding the current network."