THE first of 300 Bombardier R179 cars ordered by New York Metropolitan Transportation Authority for the subway B Division was unloaded at 207th Street yard in Upper Manhattan on September 6. 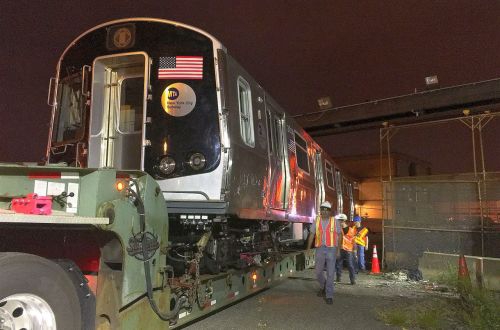 The $US 599m fleet, which was ordered in 2012, will comprise 65 four-car and eight five-car sets and will replace all remaining R42 cars, which date from 1969-70 as well as some of the remaining R32 trains, which are more than 50 years old. The new trains will be deployed on the A/C, J/Z and M lines.

The R179s are being built at Bombardier’s Plattsburgh plant in New York state and the remaining nine vehicles from the first two five-car sets are due to be delivered to 207th Street later this month. The first production cars will arrive in New York City in February 2017 and deliveries will continue until July 2018.