THE first of 20 three-car Inspiro trains for the initial phase of Sofia metro Line 3 was unveiled at the Newag plant in Nowy Sacz, Poland, on November 15. 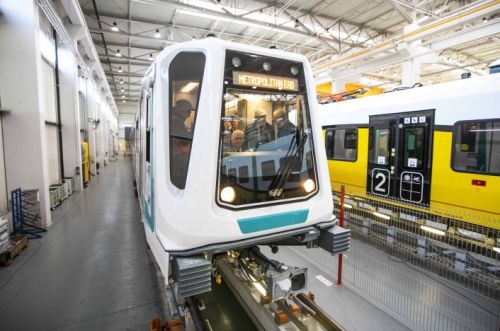 Metropolitan EAD, which operates the metro network in the Bulgarian capital, awarded a consortium of Siemens and Newag a €140m contract in March 2016 to supply rolling stock for the new east-west line, which is due to open in 2019.

Siemens is producing bodyshells at its Simmering plant in Vienna, while bogies are being manufactured at the company’s facility in Graz. Final assembly and testing is taking place at Nowy Sacz.

The 7km central section of Line 3 from Botevgradsko Shosse to Ovcha Kuptel will run entirely underground in a double-track bored tunnel and will have seven stations. When all phases are complete, the line will run for 16.5km from Vassil Levski in the east to Knazyhevo in the west, interchanging with Line 1 at St Clement and Line 2 at NDK.

The project is being funded with the aid of a €368m grant from the European Regional Development Fund.