THE latest section of Nizhniy Novgorod’s metro connecting the city centre to the newly-built Nizhniy Novgorod Stadium opened on June 13, less than a week before the Russian city hosted its first match of the 2018 World Cup between Sweden and South Korea on June 18. 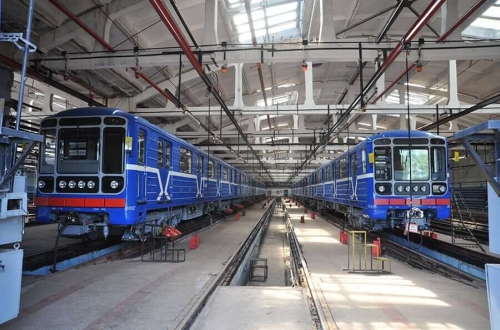 The 2.5km Moskovskaya - Strelka section is the newest addition to the 6.5km Sormovsko - Meshcherskaya Line, which currently has five stations and connects with the 14.8km, 11 station, Avtozavodskaya Line at Moskovskaya.

The new extension allows the two lines to be operated separately for the first time, which was meant to happen in 2012 when the Avtozavodskaya Line was extended across the Oka River on a new combined metro/road bridge into the old city centre but wasn’t possible due to a lack of a reversing facility available for the Sormovskaya Line beyond Moskovskaya.

Cross-platform interchange is provided at Moskovskaya.

Nizhny Novgorod Stadium, which has a capacity of 45,000, is to host four group matches, a Round of 16 game and a quarter-final.