THE NSW government has exercised an option with the Northwest Rapid Transit (NRT) consortium for operation of the under-construction Sydney City and Southwest metro line, which will be integrated to operate as one line with the Tallawong - Chatswood Northwest metro line that opened in May. 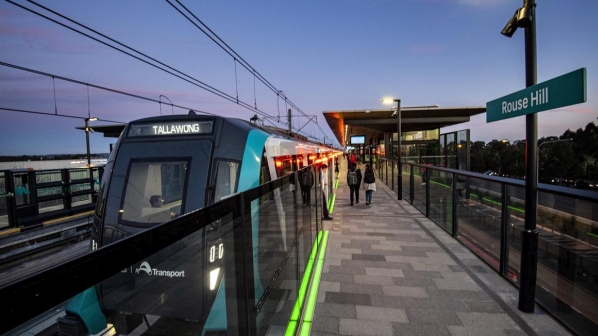 NRT was awarded a contract by Sydney Metro in 2014 to operate and maintain the Metro North West Line between Rouse Hill and Chatswood for 15 years, which included the pre-agreed option to operate the line beyond Chatswood to Bankstown.

The contract was designed to deliver a seamless customer experience along the integrated 66km line, which will stretch from Rouse Hill to Bankstown with 31 stations. The NSW Government will own all metro infrastructure, including the stations, tracks and trains.

The contract package includes $A 1.7bn ($US 1.15bn) for new metro trains and core rail systems, along with an operations and maintenance component worth $A 2bn for NRT to operate the combined Northwest and City & Southwest lines until 2034, in accordance with strict operational requirements set by Sydney Metro.

Plenary will refinance the Metro North West PPP and raise new debt and equity to finance Sydney Metro City and Southwest. Both Plenary and MTR will increase their equity positions in the project as part of a long-term commitment to Sydney Metro.

Plenary and MTR are now working with the NSW government’s Sydney Metro authority to finalise contract details and achieve financial close, which is expected in the coming weeks.

Under its share of the contract, worth around €350m, Alstom will be responsible for the project management, design, supply, manufacturing, testing and commissioning of 23 six-car fully-automated Metropolis trains and the Urbalis 400 CBTC signalling system.

The trains will be manufactured at Alstom’s facilities in Sri City, India, which has already delivered 22 Metropolis trains for the Metro North West Line. The contract also includes an option to purchase further trains if required.

The new trains must meet strict sustainability criteria, including a robust lightweight structure, low energy consumption, high levels of recoverability and recyclability, technical reliability and ease of maintenance. The trains will also be equipped with remote sensors for optimal maintenance planning.

The City and Southwest extension includes a 15km greenfield line with seven new stations, along with the upgrade of the existing suburban line to metro standards, covering an additional 13km of track and 11 existing stations. The project also includes expansion of the current Sydney Metro Trains Facility at Rouse Hill and a new depot at Sydenham. Construction of the new line is currently underway with revenue service expected to start in 2024.