The metro also renewed a maintenance contract for Line 2. 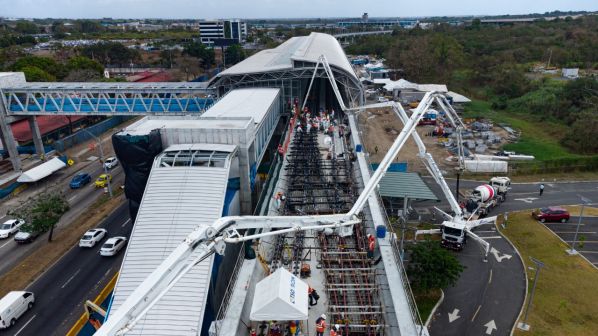 PANAMA Metro has awarded TCP Rail, a subsidiary of NGE, and CIM a $US 13.9m contract to supply and install track and rigid catenary for the northern extension of Line 1.

Panama Metro has also renewed a contract with TCP and CIM for the maintenance of Line 2, including catenary, track and workshop equipment, with the three-year extension worth $US 6.9m.

The 2.2km elevated extension of Line 1 will connect the current terminus at San Isidro station with the future terminus in Villa Zaíta, with capacity for up to 10,000 passengers per hour. The contract includes the construction of a multimodal bus and taxi interchange at Villa Zaíta, as well as a park-and-ride facility with capacity for 800 vehicles.

Tracklaying and catenary installation will begin in October with testing due to begin in May 2023. Up to 300 staff will be working under the contract at its peak.

The contract for Line 2, which includes 22km of elevated track and 5.7km of workshop tracks, runs from April 2022 until April 2025.

The TSO-CIM teams are currently finalising work on the extension of Line 2, which includes two stations at the Specialised Higher Technical Institute (ITSE) and Tocumen Airport. Panama’s cabinet approved the construction of the 2km extension in February 2020 at a cost of $US 42.7m.

“TSO has been involved in the construction and maintenance of the Panama Metro since 2011,” says NGE managing director, international and major projects, Mr Orso Vesperini. “This new project illustrates our desire to position ourselves as a major player in the 2040 Master Plan launched by Panama Metro which includes the construction of eight new lines.”

For detailed data on metro projects in South America and around the world, subscribe to IRJ Pro.