CONSTRUCTION of Line 1 of the Panama metro is now 92% complete and test running is underway. 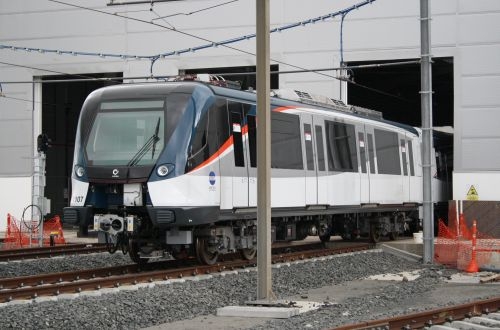 The President of Panama Mr Ricardo Martinelli and the executive secretary of the metro Mr Roberto Roy were on board the inaugural test train on September 13 which ran along a 2km section of the line between Albrook and 5 de Mayo stations.

The $US 1.8bn project is being implemented by a consortium led by FCC, Spain, and including Odebrecht, Brazil, for the civil works. Alstom is supplying 57 cars, traction substations and communications-based train control, while Thales is responsible for supervision and telecommunications.

Line 1 will run from Albrook bus terminal to Los Andes shopping centre in San Miguelito. It was originally planned to be 14km long with 11 stations but has subsequently been extended to 15.9km with 13 stations. It is expected to carry 15,000 passengers/hour/direction when it opens next year, rising to 40,000 by 2035.

Photo: President Martinelli seated at the controls during the inaugural test run on September 13.