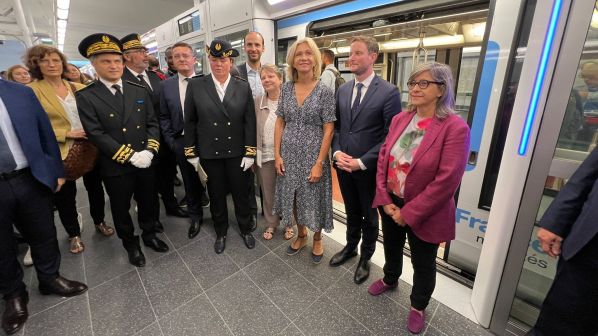 The official ceremony to mark the start of driverless operation on Line 4 was presided over by RATP Group president and CEO, Ms Catherine Guillouard (far right).
Photo Credit: RATP

DRIVERLESS trains began carrying passengers for the first time on Line 4 of the Paris metro network on September 12, marking a major milestone in the conversion of this route to automatic operation.

A total of four trains are now operating in automatic mode, with the entire Line 4 fleet of 52 trains due to switch to driverless operation by the end of 2023.

Line 4 runs for 13.9km from Porte de Clignancourt to Bagneux-Lucie Aubrac, serving 29 stations. It is the second-busiest line on the metro network according to operator Paris Transport Authority (RATP), carrying 700,000 passengers a day.

Conversion to automatic operation has cost €470m, met entirely by regional transport authority Île-de-France Mobility. Work on the project began in 2016 and has been undertaken without major closures on Line 4.

Work has included raising platform heights and installing platform screen doors at the 29 stations on Line 4. The screen doors total over 5km in length and feature real-time passenger information displays.

Trials of driverless operation without passengers began in mid-June and took place during off-peak hours with an RATP supervisor onboard.

Driverless operation on Line 4 will be conducted with three types of rubber-tyred rolling stock, the MP89 and MP05 trains first introduced on Line 14 and the new MP14 fleet.

The Line 4 control centre has been completely upgraded and is now equipped with the SAET automatic train operating system and new video and audio systems enabling staff to communicate with passengers on the trains and in stations.

Control centre equipment and software was supplied by Siemens Mobility, which also installed CBTC signalling on the route, its depots and fleet of 52 trains. Automation is expected to increase operational efficiency, reduce delays, and lower traction energy consumption by up to 15%.

Amongst the other advantages of automatic operation, RATP highlights the increase in line capacity, the ability to adapt the train service to meet demand in real time, and the reduction in headways between services from 105 to 85 seconds.

Driverless operation should enable more staff to be deployed on the trains and in stations to assist passengers.

Line 4 is the second route after Line 1 to be converted to driverless operation, which was introduced on the Paris metro network with the opening of Line 14 in 1998, which was built for automatic operation.

Lines 15, 16, 17 and 18 of the Grand Paris Express network are being built for automatic operation. Île-de-France Mobility is considering other existing routes for conversion, such as Line 13.

“This automation of a century-old line is a further demonstration of the unique know-how of the RATP Group and its partner Siemens Mobility in terms of automatic metro systems,” says RATP Group president and CEO, Ms Catherine Guillouard.

“From now on, other modernisation projects will be carried out with Siemens Mobility, in particular the implementation of a new automatic control system on Line 14 and its extensions to Saint-Denis Pleyel and Orly Airport.”

“Our state-of-the-art CBTC signalling at Grade of Automation 4 allows trains to operate in driverless mode and be automatically controlled and supervised without any onboard intervention,” says Siemens Mobility CEO, Mr Michael Peter. “This truly modern system increases the reliability and availability of the service, which will deliver an enhanced passenger experience for the 700,000 daily riders of Line 4.”