THE first of two prototype trains built by Indian Railways’ Integral Coach Factory (ICF) for the Kolkata metro was unveiled on July 4 in the presence of the chairman of Indian Railways Mr A L Mital and the ICF general manager Mr S Mani. 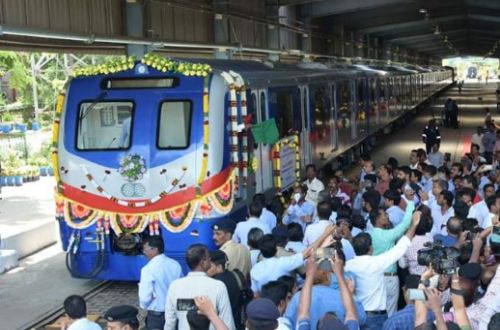 The stainless-steel-bodied train has wide inter-car gangways to facilitate passenger distribution within the train. It is fitted with electrically-operated sliding doors, air-conditioning, a passenger intercom, LCD information displays and LED destination signs.

The eight-car train will accommodate up to 3050 passengers. Each train cost Rs 400m ($US 6.2m) to build which ICF claims is half the cost of an imported metro train.

Once testing has been completed, ICF will build 26 1676mm-gauge trains for the Kolkata metro. ICF has also offered to build a prototype train for Chennai Metro Rail as a 1435mm-gauge demonstrator.