THE first Budapest metro Line M3 train to be rebuilt by Metrowagonmash, Russia, returned to passenger service on March 20 following an inaugural run for officials and the media. 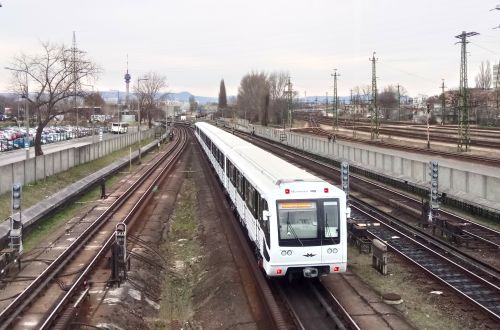 However, the first few days were marred by a series of technical issues including faults in the door actuation and braking systems. These problems were subsequently rectified by Metrowagonmash engineers at the Budapest Transport Company (BKV) depot.

Despite the extent of the modernisation, the trains are still pressure-ventilated, with air conditioning only installed in the driver’s cab. However, the rebuilt type 81-714 2K and 81-716 2K cars have been equipped with regenerative braking, which will reduce heat in tunnels. Metrowagonmash is rebuilding a total of 222 cars in a deal worth €220m. This is at least 25% cheaper than buying new trains from Alstom, which supplied rolling stock for Line M2.

By the end of March, five rebuilt sets had arrived in Budapest. These are being transported by rail from Russia to Hungary via Poland and Slovakia. By the middle of April, at least three sets should be in revenue earning service and the modernisation programme should be completed by mid-2018.
The 17km Line M3 carries more than 500,000 passengers a day, making it the busiest metro line in Budapest.