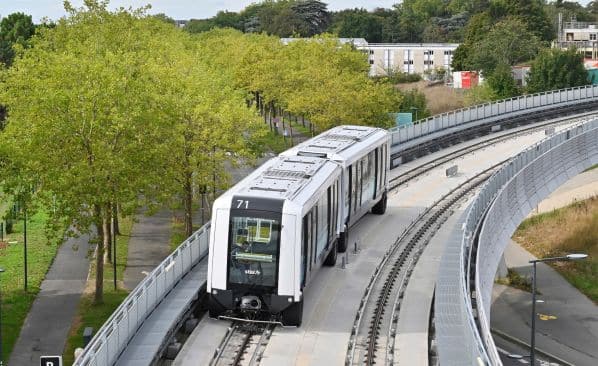 The 13km Line B runs from Saint Jacques-Gaïté in the southwest via Gares in the city centre, where it interchanges with Line A, to Cesson Viasilva in the northeast, and has 15 stations.

Rennes is the first city to be equipped with Siemens’ new generation CityVal trains and ATO system, while Line A, which opened in 2002, has VAL technology.

Siemens was awarded a turnkey contract for the project to supply 25 two-car rubber-tyred trains, the train control systems, track, electrification, platform screen doors, the operating control centre, the depot, radio communications and real-time CCTV transmission in the stations and onboard the trains.

CityVal can run at 60 second intervals, and trains can be lengthened by adding a centre car to cope with extra traffic - Line A currently suffers from overcrowding during peak periods.

The trains have wide doors for better access to platforms, large floor-to-ceiling windows, and real-time passenger information. The trains can negotiate gradients of up to 10% and sharp curves. Siemens says innovations in the design of the concrete slab, guiding rail and switches should reduce infrastructure and maintenance costs.

Siemens adds that energy consumption will be reduced thanks to the management of the movement of automated trains using the CBTC system, while 100% electric braking will produce energy savings of up to 15% with virtually no particle emissions.

For more data on light metro projects around the world, subscribe to IRJ Pro.