Repairs to Santiago metro could cost $US 380m

THE Santiago Metro is continuing to recover after the network was badly damaged during protests last month, but the effects of the protests and the resulting social changes could have a long-term impact on the expansion of the network. 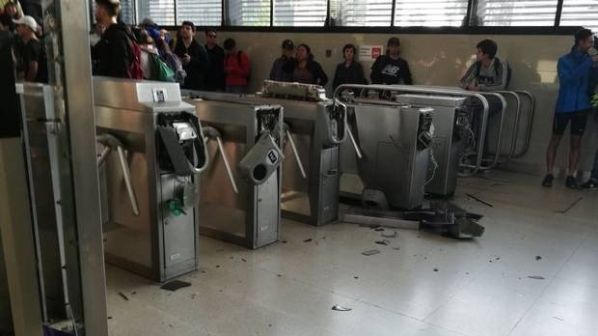 Many ticket gates on the Santiago metro were damaged.

By November 4, six of the seven lines were operational, although services were still skipping the most vandalised stations on all lines. Overall, 81 of the network’s 136 stations were open to the public but Line 4A had no service at all while the heavily-used and similarly vandalised 25km Line 4 was operating over less than half of its total length. The remainder of Line 4 will be inoperative until well into 2020 as some of the stations will need to be effectively rebuilt and all the equipment replaced.

Repairs have been preliminarily costed at $US 380m, and are mainly uncovered by insurance. As reported on October 24, the Metro’s expansion plans are at risk of being delayed or cut back.

This is due to:

Since two-thirds of metro expansion is government-financed and the package of new lines 7, 8 and 9 has a combined estimated cost of $US 6.5bn, something is likely to have to give.

The uprising, sparked by the metro fare hike, has already led to the cancelation of three major events that Santiago was due to host in the November-December period.

These comprise the Asia-Pacific Economic Cooperation (Apec) Forum, whose participants would have included the presidents of the United States and China; the COP 25 United Nations climate change conference, which 25,000 delegates were expected to attend and which has been moved to Madrid; and the final of the Copa de Libertadores football competition, which will now be played in Lima.