SERVICES on Santiago Metro have slowly began to recover after the network was badly damaged during protests against a 4% fare increase on October 20. 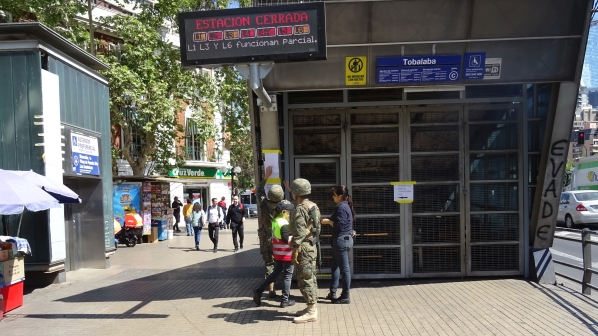 The entrance to the Line 4 section of Tobalaba metro station is shut and guarded by military personnel, the presence of whom is appreciated, and considered necessary, by most citizens. One is placing an advisory notice at the gated entrance, while the illuminated sign reads "Station closed. Lines 1, 3 and 6 are operating partially."
Photo Credit: Ian Thomson Newman

The civil disobedience resulted in many station ticket gates being destroyed, nine stations being completely burnt down, 13 partially destroyed by fire, 41 stations suffering serious damage and 17 suffering less-serious damage. In all, 80 of the metro’s 136 stations will require repair. During the weekend of October 19-20, the entire metro network was shut down for the first time, with some lines partially reopening on October 21.

By October 23, lines 3 and 6 had resumed operating over their whole length, with services not stopping at the most damaged stations. Line 6 is of special interest to the government as Santiago is due to host the COP25 congress on climate change in December, which is expected to attract up to 25,000 delegates. Most of its meetings will be held at the site of the city’s previous airport at Los Cerrillos, which is located at the southwestern end of the line. Line 6 also serves the National Stadium, where the final of the Copa de los Libertadores South American football championship is due to be held on November 23.

On October 22, the Chilean president, Mr Sebastián Piñera, announced a series of measures intended to address the root causes of the protest sparked by the metro fare hike. In addition to the metro fare freeze, these include an increase in the monthly minimum wage to the equivalent of almost $US 500, an increase in income taxes for the very highest earners and various increases in pensions. However, this was not enough to satisfy many citizens who have continued to march through the streets, less violently but in greater numbers. Attacks on metro stations waned, possibly due to increased vigilance, but those on shops such as supermarkets and pharmacies continued. The president also announced a fund of $US 350m to finance reconstruction, especially of the metro. The cost of this is unknown, but has been set at more than $US 300m by the company´s chairman.

Aside from the 2008 worldwide financial crisis, for the past 45 years, Chile has been acclaimed as model for responsible financial management. The finance minister, Mr Felipe Larraín, will do what he can to preserve the country’s reputation in this regard. Since the package of measures already announced by president Piñera will increase 2020 budget expenditure by some $US 1.2bn, cuts might have to be made in other areas.  At risk could be the schedule of expansion of the metro itself, whose lines 7, 8 and 9 are planned for completion by 2026, at a cost of some $US 6.5bn.  As the network expands, operating costs increase but these cannot be recouped from users due, in part, to the flat fare policy. The flat fare policy was fine when the metro opened its first 10km section in 1975, but, although not widely debated, must be increasingly unwieldy as the network approaches 200km.