The line will be 29km long. 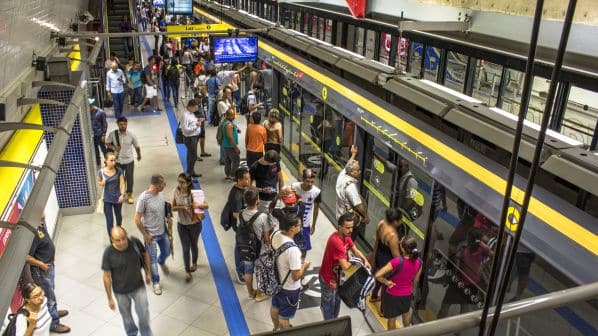 SÃO Paulo Metro has started tendering for a contract to provide preliminary engineering and environmental studies for the new Line 22-Brown, which will run from Sumaré station on Line 2-Green in the city centre to the municipality of Cotia in the southwest of the city via Osasco.

The provisional route is 29km long with 19 stations and differs from the original plans with the addition of Santa Maria and Victor Civita stations in Osasco. The line will provide interchange with Line 9-Emerald at Hebraica-Rebouças station; 4-Yellow at Faria Lima; 2-Green at Sumaré; and with the planned Line 20-Pink at Teodoro Sampaio.

São Paulo Metro predicts it will require at least 52 trains to carry the 650,000 passengers expected to use the line each day. As the line connects the western area of the city - where there is a high population density but fewer jobs - with the Avenida Brigadeiro Faria Lima area where there are more employment opportunities, this is expected to result in high passenger flows in a single direction in the morning and evening.

The project will be built in two phases, starting with the section between Sumaré station and Granja Viana station with 13 stations. The second phase to the Cotia bus terminal will add six stations, with the bus network will be improved to carry passengers before the second phase is completed.

Under a previous proposal Line 22 would have terminated at Rebouças station on Line 20, but with plans for Line 20 changing, Line 22 will now continue to Sumaré on Line 2. The original goal for Line 22, to relieve congestion on the Raposo Tavares Highway, remains a key priority.

Bids will be submitted on November 17, but the deadline may be extended due to the complex nature of the tendering process. Studies are due to be completed within 35 months of the contract being awarded.