The contract includes the supply of autonomous hydrogen-powered vehicles. 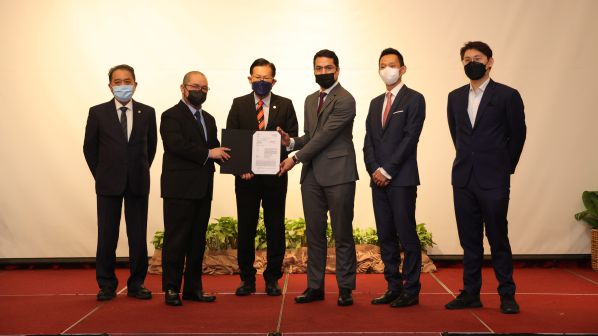 The trains for the first metro network in Sarawak, a Malaysian state on the island of Borneo, will be guided using an optical system and will operate at Grade of Automation 2 (GoA2).

“With our aspiration of having a sustainable public transport solution that also tackles the issues of climate change, that is why we have with us these companies collaborating to bring us the world’s first hydrogen fuel cell-powered autonomous rapid transit system,” Abang Johari said in his speech read out by Lee.

He also confirmed the system would use hydrogen traction in line with Sarawak’s green hydrogen plans and the development of Sarawak’s hydrogen economy.

The contractor has committed to adding value to the KUTS project through Sarawak Metro’s Socio-Economic Enhancement Development (SEED) Programme by training staff and developing the supply chain.

“It is my sincere hope that through such initiatives, a new generation of young Sarawakians will be able gain new knowledge and skills to play a meaningful role in this new industry, namely a modern and green public transport sector,” Abang Johari said. “With the creation of a pool of skilled workforce in this sector, I am confident that in the future, these Sarawakians will not only contribute to the industry in Sarawak but they will also be sought after by public transport system developers and operators from cities all over the country and the region.”

The Sarawak government recently approved Sarawak Metro’s proposal alignment of Phase 1 of the KUTS project, which now includes a line towards the Santubong peninsula.

“Although this new alignment will be about 20km longer than the one proposed earlier by Sarawak Metro, we have managed to keep the overall cost of the project to below Ringgits 6bn, through Sarawak Metro’s ongoing value engineering initiative,” Abang Johari said. “I know that Sarawak Metro also continues to plan for future Autonomous Rapid Transit (ART) routes for Greater Kuching under the KUTS project, as well as for other alignments that could potentially create significant socio-economic benefits for the people of Sarawak.”

During the event, Sarawak Metro also exchanged memorandum of understanding (MoU) documents with Ibraco and Peranan Makmur, a subsidiary of Naim Holdings, agreeing to collaborate on the development of ART stations near the companies’ Kuching Paragon and NorthBank property developments.