HONG Kong’s 17km Shatin to Central Link metro project took some major steps forward in the past week as the new east-west line remains on course to open in mid-2019. 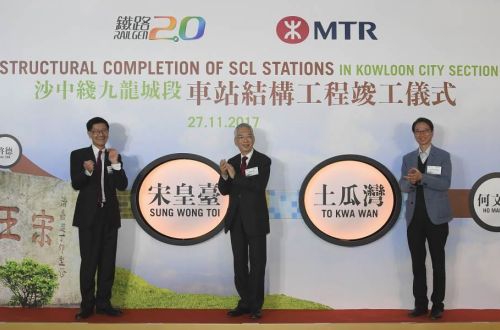 Mr Joseph YT Lai, permanent secretary for housing and transport, and Mr Lincoln Leong, CEO of MTR Corporation, attended a ceremony to mark the structural completion of two stations on the Tai Wai - Hung Hom corridor on November 27. In addition, all tunnel boring works were completed on the 10.4m stretch between Admiralty and Exhibition stations following three years of work on November 19.

All four rail tunnels passing through various districts of Hong Kong which make up the corridor have now been completed, and SCL tunnelling is now 93% complete. The Admiralty - Exhibition tunnelling work was completed four months ahead of schedule. More than 51,000 tunnel segments, each weighing approximately 3.8 tonnes, have been installed with over 300,000m³ of soil and rock removed.

“Constructing underground tunnels in the hustle and bustle of the city, amid closely packed buildings and heavy traffic is never an easy task,” says Mr TM Lee, general manager, SCL and E&M Construction at MTR. “We have successfully excavated tunnels beneath 50-year-old buildings in Mau Tau Wai area in a safe manner without affecting the railway operation of the Kwun Tong Line and Tseun Wan Line and with minimal impact on the traffic on major trunk roads. Other challenges such as geological complications and underground utility obstructions have also been overcome.”

The two new stations, named To Kwa Wan and Sung Wong Toi, are the final two to be completed on the Tai Wai - Hung Hom section, tunnelling for which was completed in September 2016. Fitting out works are now underway on this section, including electrical and mechanical works, while civil works are underway on the Hung Hom - Admiralty section. On-going works along the section from Sung Wong Toi to Hung Hom comprise the fitting out of communications equipment, signalling system, tunnel ventilation, platform screen doors and overhead line equipment. As for the Kai Tak to Hin Keng section, works have recently progressed to a more advanced stage with passenger trains running on the track as part of the dynamic testing of various railway systems.

The Tai Wai to Hung Hom section is an extension of the existing Ma On Shan Line from Tai Wai via East Kowloon to connect with MTR’s West Rail Line at Hung Hom. The Hung Hom - Admiralty line will extend the existing East Rail Line from Hung Hom to Exhibition and Admiralty via a new cross-harbour rail tunnel. The completed project will offer a 56km, 27 station rail corridor, the longest in Hong Kong.