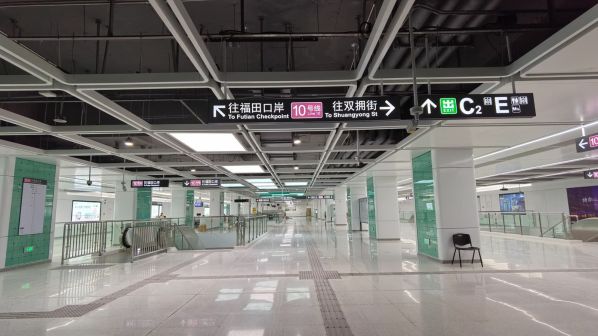 The 49km Line 6, known as the Guangming Line, runs northwest from the Science Museum interchange in the centre to Songgang, and will serve the districts of Bao'an, Guangming, Longhua, Futian and Luohu, incorporating 12 underground and 15 elevated stations.

The line, on which construction began in August 2015, forms part of the third phase of metro expansion in Shenzhen. Trial running began in January this year.

As part of the city’s green metro programme, solar panels have been installed at 12 of the elevated stations. It is expected that the systems will generate a combined total of around 2.3MWp of power, or roughly 30% of the total power needs of each station.

The solar panels are estimated to save around 54.65 million kWh, with a projected net economic benefit of around Yuan 50.47m ($US 7.3m) over the course of their 25-year lifespan.

In addition, the line includes other measures to reduce noise and vibration as well as preassembled slab track to reduce concrete works in urban areas.

The line is to be served by a fleet of 51 six-car aluminium-bodied Type A trains supplied by CRRC Nanjing Puzhen, which operate at up to 100km/h and have a capacity for up to 2738 passengers.

The 29.3km Line 10, known as the Bantian Line and originally designated as Line 16, also opened on the same day, following trials which began in March.

Construction on the line started in October 2015. It is expected to reduce travel times between the port of Shenzhen and Pinghu to only 45 minutes, and is intended to ease severe congestion on Line 4, previously the city’s only direct north-south metro connection.

The line runs north-south between Shuangyong Street and Futian Checkpoint, where it interchanges with Line 4. Line 10 serves 24 underground stations in the districts of Pinghu, Banxuegang, Huawei New Town, and Meilin.

The line will be operated by a fleet of 35 eight-car Type A trains supplied by CRRC Changchun, which will operate at speeds of up to 80km/h.

The main depot for the fleet at Liangmaoshan will be augmented by a two-level depot at Yitian near the southern end of the route. An infill station at Gangxia Bei is planned to open in 2021. Extensions to Huangge and Jinhu Lu are also planned in the longer term.

In addition to the new lines, four new extensions to lines 2, 3 and 4 are scheduled to open later this year.