TRIAL passenger operation began on two new metro lines in Shenzhen on October 28, adding 55.6km to the network, which at 285km is now the third largest metro in China after Beijing and Shanghai. 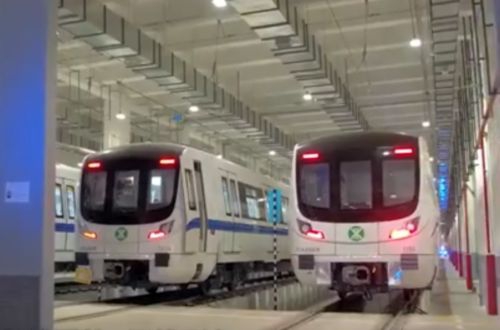 The 30.3km east-west Line 7 links Tai’an in Luohu with Xili Lake in the district of Nanshan, serving 28 stations including 10 interchanges with other metro lines. The journey time between the two termini is 55 minutes.

The 22-stion Line 9 runs for 25.3km from Hongshuwan in Nanshan to Wenjin in Luohu and serves 22 stations, including 10 interchanges, with an end-to-end journey time of 45 minutes.

During the initial stage of public operation services on both lines are running at 10-minute headways between 06.30 and 23.00.

In 2014 Shenzhen Metro Group awarded CNR Changchun Railway Vehicles (now part of CRRC Corporation) a contract to supply 70 type A metro trains for the two lines. The order comprised 41 sets for Line 7 and 29 for Line 9. Each six-car train will accommodate up to 2502 passengers.

Shenzhen Metro Group forecasts the two lines will increase ridership on the network by 700,000 to 4.5 million passengers per day when they are fully operational.