SIEMENS and Berlin U-Bahn operator BVG have announced they have agreed to resolve a legal dispute over the procurement of new U-Bahn EMUs. 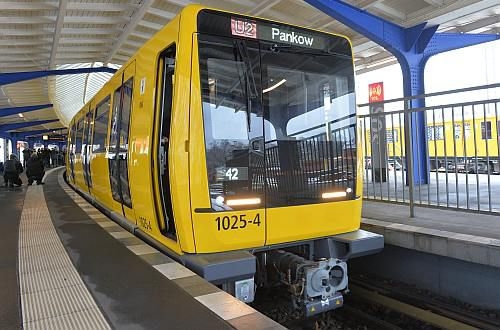 BVG had placed an order with Stadler worth around €120m for 20 new four-car small-profile type-IK EMUs.

The out-of-court agreement follows discussions between both parties and an agreement by BVG to partly modify the October 2017 order it placed with Stadler worth around €120m for 20 new four-car small-profile type-IK EMUs. BVG placed the order without a full tendering procedure as an “emergency purchase,” citing urgent requirement for the vehicles. In return for the agreement to amend the order, Siemens has agreed to drop its legal challenge to the procurement.

Siemens had launched legal action arguing that the “urgency” around the contract award was due to BVG’s fleet planning and decision making and was not genuinely urgent. Siemens successfully blocked the order in court in late May and the initial injunction was upheld in a separate hearing at the Berlin Court of Appeal in mid-June, with a full hearing to decide the merits of the case set for mid-October. The new agreement means this will not be required.

The agreement reduces the number of trains BVG can buy from Stadler to a maximum of 56 coaches formed as 14 four-car EMUs, designated type IK19, which can be delivered from next year. BVG and Siemens will jointly assess if the remaining six trains, a further 24 cars, are required. That will depend on how many of the 1970s vintage F79 series trains have been withdrawn - as it was the lack of planning for their orderly replacement that Siemens’ legal case hinged on.

The main argument was that the order did not need to be an “emergency purchase” as pre-planning would have removed the urgent requirement for the vehicles. BVG had originally planned a life extension programme but instead chose to replace them without tendering the order. The BVG/Siemens agreement will permit some or all of the remaining six additional IK-series trains to be ordered from Stadler on the condition that both parties agree that at least 49 of the 70 F79 series vehicles currently in use are uneconomical to repair and have to be withdrawn.

BVG plans to use the new IK19 trains to replace the type F79 trains in the short term and to operate additional trains on the busy Line U5 as well as its future extension from Alexanderplatz to Berlin Main Station. As small profile vehicles, the type IK trains are not optimal for use on large profile routes such as the U5, as the available space within the loading gauge is not fully used. BVG had planned to convert the IK19 trains back to small profile use in the future once new, as yet un-ordered, large profile trains have been obtained, sometime in the 2020s. To alleviate the current shortage of rolling stock, BVG has been operating services on the short U55 Line using 60-year-old museum stock since 2017 - releasing the F79 trains for use on other routes.

As well as the disputed IK19 batch, BVG has previously ordered 40 of the IK type trains through the normal tendering procedure which are in service or being delivered this year.