IRJ at InnoTrans 2012: SIEMENS Inspiro metro train has made its public debut at InnoTrans, where vehicles from the first train for Warsaw Metro are on display. 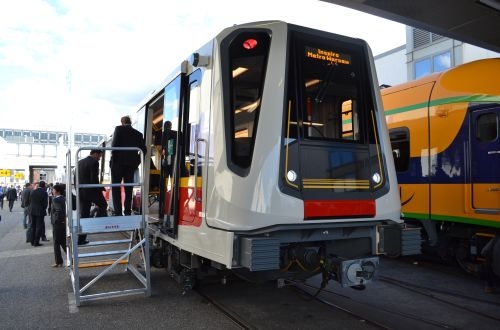 Warsaw Metro placed a €272m contract for 35 six-car trains from a consortium of Siemens and Newag in February 2011. The first ten trains are being built at Siemens Simmering plant in Vienna, while the remainder will be assembled by Newag at its plant in Nowy Sacz, Poland.

Following the exhibition the train will return to Simmering for static testing, before moving to the company's Wildenrath test track for dynamic testing. The first two sets will be delivered to Warsaw in December and the trains will enter commercial service from next May.

Fifteen of the trains will enter service on Line 1 while the remaining 20 sets will be used on the new Line 2, which is due to open at the end of next year.