SINGAPORE’s Land Transport Authority (LTA) has launched a Tunnel Boring Machine (TBM) at Keppel station to begin the first stage of tunnelling for the Circle Line Stage 6 (CCL6), which will complete the Circle Line (CCL) loop by connecting the current terminus stations at Harbour Front and Marina Bay. 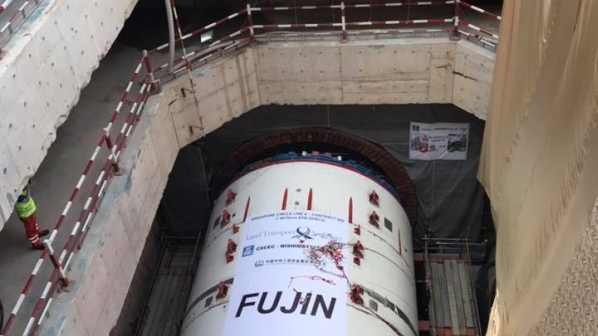 LTA also outlined a series of system enhancements to the existing CCL in preparation of CCL6 opening in 2025, to allow the existing network to support the larger network and fleet.

The TBM will tunnel from Keppel station to Harbour Front station, while two additional TBMs are expected to be launched in September and October.

Construction of the three CCL6 stations - Keppel, Cantonment and Prince Edward Road - as well as the expansion of Kim Chuan depot commenced in 2017, with works due to be completed by 2025.

Around 66% of retaining and stabilising structure works have already been completed, and excavation works and construction of structures has also commenced and are progressing well.

Foundation and excavation works for the depot extension are also underway.

Following the opening of CCL6, the CCL will have a total of 33 stations with 12 interchanges to connect to all existing MRT lines and the future Thomson - East Coast Line.

The expanded depot will provide additional stabling facilities to accommodate a fleet of 133 trains, while the above ground bus depot will house 550 buses.

The programme of enhancements announced by LTA and Singapore MRT operator SMRT includes upgrades to the:

“In addition to the civil works for CCL6, we have started works to upgrade the key systems for the CCL to ensure that the existing and new systems work seamlessly,” says LTA chief executive, Mr Ngien Hoon. “As we are working on a live railway system, we will work closely with SMRT to put mitigating measures in place to ensure daily operations will not be impacted. With the completion of the upgrading works, we can look forward to the smooth integration of the existing CCL system with the three new CCL6 stations when they are ready.”

“With the network reaching the 10-year mark, it is essential that we start the renewal process early and apply the lessons learnt from the renewal of the North - South and East - West Lines to improve reliability,” says Mr Neo Kian Hong, SMRT corporation group chief executive officer.

LTA is purchasing 12 new trains from Alstom to accommodate the forecast increase in passengers when the CCL is fully operational, in addition to the 11 trains ordered in April 2018.