Singapore to complete Circle Line by 2025

SINGAPORE's Land Transport Authority (LTA) announced the alignment and station locations for the sixth and final phase of the Circle Line (CCL6) on October 29, confirming that it will complete the 36km loop by 2025. 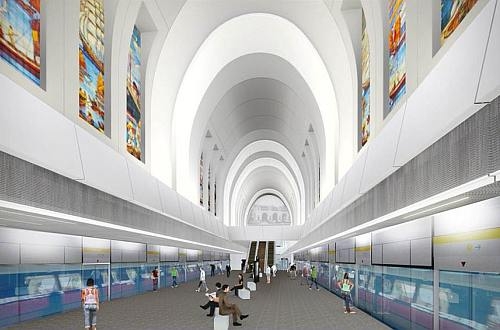 Artist's impression of the planned Cantonment station, which is designed to reflect the architecture of the adjacent Tanjong Pagar Railway Station.
Photo Credit: LTA

The 4km CCL6 will extend the line from Habour Front to Marina Bay with new stations at Keppel, Cantonment, and Prince Edward, bringing Spottiswoode and the southern city centre onto the island's rail network.

LTA says the new stations will be sensitively designed to reflect the architecture of surrounding buildings. For example, Cantonment station will be integrated with Tanjong Pagar station, former terminus of the now-abandoned mainline link from Malaysia, which is designated as a national monument.

The cater for the increased size of the train fleet, the Circle Line's underground Kim Chuan depot will be expanded to almost double its capacity from 70 to 133 three-car trains and will also accommodate up to 550 buses.
When it is completed in 2025, the 33-station Circle Line will provide a direct link between Western districts such as Pasir Panjang and Kent Ridge with key employment areas in the city centre and new residential and commercial developments in Marina Bay.

To line will include 12 interchanges with other MRT lines and, as a radial metro, will increase connectivity and capacity by linking existing lines and creating multiple route options, relieving some of the network's busiest stations.