STOCKHOLM moved a step closer to a major expansion of its urban rail network on March 30, when the Swedish government concluded negotiations with local authorities on an agreement which links investment in new housing with significant improvements to the public transport system. 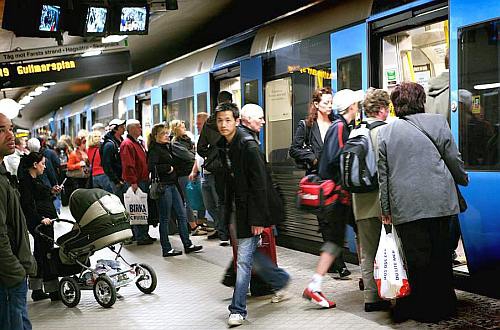 Through the National Negotiation on Housing and Infrastructure, the Swedish government has been negotiating with Stockholm City Council, Stockholm County Council, and five municipalities in the city since February 2016 on how to sustainably accommodate future population growth.

Under the agreement, 100,370 apartments will be built by 2035 in parallel with a SKr 30.2bn ($US 3.4bn) investment in the public transport network, including SKr 5.1bn for rolling stock and depots. The funding includes grants from the state based on local commitments to housing and tackling congestion. Co-financing from municipalities is linked to the increase in the value of housing and finance from Stockholm County Council will be based on reduced travel times.

Rail projects include:
- a new six-station north-south metro line from Fridhemsplan to Älvsjö (SKr 12.6bn)
- a new southern light rail line from Älvsjö to Flemingsberg via Masmo, Skärholmen, and Fruängen (SKr 4.2bn)
- extension of the Roslagsbanan to Odenplan and T-Centralen station in the city centre (SKr 7.1bn), and
- an extra station at Tapiola on the new metro Yellow Line from Arenastaden to Hagastaden (SKr 1.2bn).

Work will begin on all four projects by 2026.

For detailed data on rail projects around the globe subscribe to IRJ Pro.