JUST two years after the start of construction, testing was officially launched on the first metro line in the Indian city of Nagpur on September 30, when the first trial run was flagged off by surface transport and shipping minister Mr Nitin Gadkari and Maharashtra chief minister Mr Devendra Fadnavis. 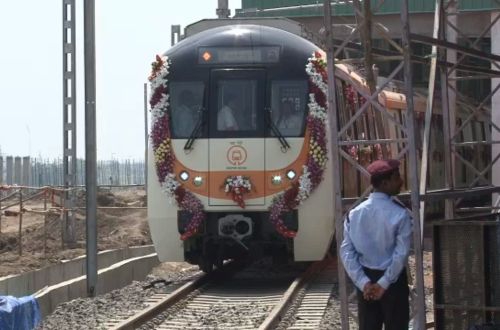 The three-car train travelled over the 5.6km at-grade section of Line from Mihan to Khapri. Commercial operations are due to begin on this section in December.

Due for completion by 2023, the Rs 86.8bn ($US 1.4bn) first phase of the metro network in india’s 13th-largest city comprises the 19.7km north-south Line 1 from Automotive Square to Khapri and the 18.6km Line 2, which will run from Prajapati Nagar in the east to Lokmanya Nagar in the west. The two lines will intersect at Sitaburdi Interchange in the city centre.

The project has a particular focus on renewable energy, and 65% of electricity requirements will be met from solar sources.

Between 2014 and January 2017, India’s Urban Development Ministry sanctioned Rs 306.5bn for metro projects and released Rs 123.4bn in government funding to metro developers. For the 2017-18 financial year, the ministry allocated Rs 179.6bn for metro development, of which Rs 46.5bn had been spent by June.