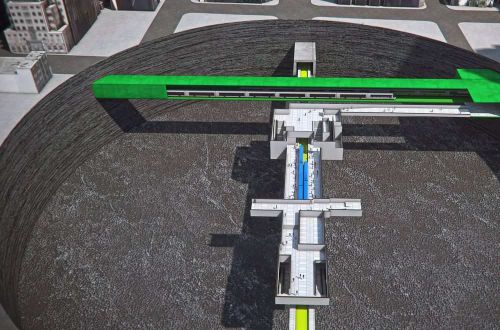 McGill station with REM platforms on the lower level.

McGill station in the city centre would be built directly beneath the existing metro station between Eaton Centre and Place Montréal Trust, while Édouard-Montpetit near the university and hospitals in Côte-de-Neiges will also be built adjacent to an existing metro station, with platforms 70m below street level. CDPQ Infra estimates that the journey time between these two stations could be reduced from around 30 minutes using the existing metro Green, Orange and Blue lines to just three minutes on the REM, while relieving pressure on this section of the Orange Line.

A third additional station at Bassin Peel will improve access to Griffintown and Pointe-Saint-Charles.

The extra stations will add around $C 400m ($US 296m) to the cost of REM, bringing the overall cost of construction to $C 5.9bn, although they are expected to increase ridership on the network by 15%. CDPQ has committed $C 100 towards the cost of the three stations, taking its total investment in the project to $C 3.1bn, while the province of Quebec and the city of Montreal have each agreed to contribute $C 100m. The remaining $C 100m would come from the federal government.

Construction of the 67km REM network is expected to start next year with commercial operations due to begin in 2020.