TRACK laying on the $A 1.86bn ($US 1.3bn), 8.5km Forrestfield - Airport rail link in Perth has begun, with 1km already constructed near Redcliffe station since tunnelling was completed in April. 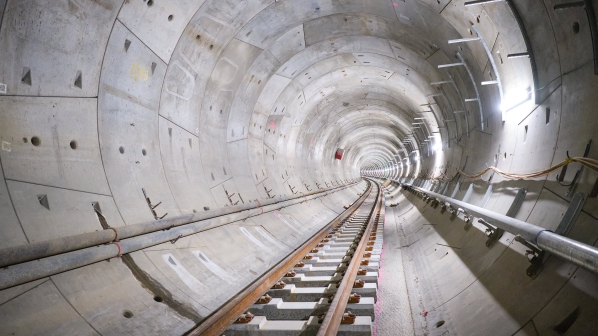 The track is being laid by Martinus Rail, Australia, which was awarded the contract by the joint venture between WeBuild, previously Salini Impregilo, and NRW, which is building the line. More than 2400 tonnes of Australian-manufactured steel will be used for the project, with around 40km of rail needed to construct the track in each tunnel, connections at Bayswater and a train stabling facility in High Wycombe.

The rail sections are initially 27.5m long, before being flash-butt welded into 220m strings. Multiple teams are working simultaneously to weld, transport and lay the rail and sleepers to form the skeleton track in the tunnels, before pouring the concrete to complete the slab track process.

Work is also underway to prepare for the installation of the overhead electrification and the communications and signalling systems.

The Forrestfield - Airport link will be named the Airport Line when it opens in late 2021, and will provide a 20-minute link between the Perth city centre and the eastern suburbs, compared with 45 minutes by road, with new stations at Redcliffe, Airport Central and High Wycombe.

The service is expected to transport 20,000 passengers per day by 2022, potentially taking up to 15,000 vehicles off the roads every day.