MORE trains are now running on the New York rail network following the devastation caused by Hurricane Sandy earlier this week. But it will be several weeks before all the repairs will be completed. 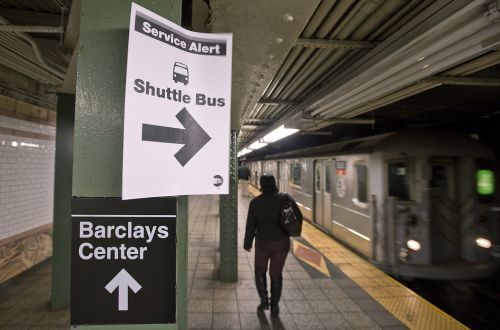 Buses are replacing trains on much of the New York Subway.

In the meantime, New York's governor Mr Andrew Cuomo announced that passengers can travel free of charge on all commuter rail, bus and subway services until midnight.

Metro-North Railroad is operating close to a scheduled service on the Hudson Line between Croton-Harmon and Grand Central Terminal (GCT) in Manhattan, on the Harlem Line between Southeast and GCT, and on the New Haven Line between New Haven and GCT. This has been made possible by continued progress by Metro-North crews to clear tracks of debris, inspect critical infrastructure and repair damaged components.

An hourly-interval service is now being provided on the Port Washington, Ronkonkoma, Babylon and Huntington branches of the Long Island Rail Road (LIRR). This was as a result of focussing recovery work on these branches, which are the LIRR's four busiest.

On the New York Subway, the 5 Shuttle began operating this morning between East 180th Street and Dyre Avenue in the Bronx, joining the roster of available limited subway service. "As we have said from the beginning, we will bring service back on a gradual basis as we are able to do so," says Mr Joseph Lhota, chairman of the Metropolitan Transportation Authority (MTA). "The subway system will be a shifting landscape for some time to come, but we are making steady progress toward some level of normalcy."

More work needs to be done to restore full rail and subway services, and MTA expects this to take several weeks in some areas to fully complete. Fallen trees and wires are still being removed from tracks of both the LIRR and Metro-North Railroad. Crews need to repair washed out sections of track, and pump water out of several under river subway tunnels.