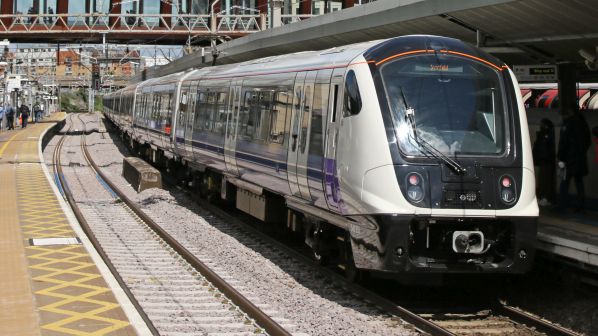 A class 345 train at Stratford during a test run to Shenfield on May 11.
Photo Credit: Keith Fender

TRIAL running of class 345 Aventra EMUs for the Elizabeth Line began through the new Crossrail tunnels beneath central London on May 10.

Trains are operating from the Crossrail depot at Old Oak Common to Gidea Park and Shenfield plus Abbey Wood through 21km of dual-bore tunnels. While test trains have operated in the tunnels previously, the introduction of through running to Shenfield is a key milestone as the trains are running on both Crossrail and Network Rail (NR) infrastructure east of London for the first time.

Transport for London (TfL) says the new railway is set to open in the first half of 2022 after delays due to construction issues and systems integration problems were exacerbated by the Covid-19 pandemic. The deadline was extended from its summer 2021 completion date last August while an additional £450m was added to the total cost of the project, taking it to more than £18bn.

Dynamic testing of trains and systems known as systems integration dynamic testing began in the central tunnel section in November 2020 after a period of intense final engineering work in 2020.

Crossrail is set to steadily ramp up the numbers of trains running in the tunnels and on the existing rail network to allow the railway and the supporting systems to be operated as close as possible to an operational timetable in order to build reliability. Final work is continuing on some central section stations in parallel to trial running. A final phase of trial operation will commence in late 2021/early 2022, which will include running with passengers onboard to test multiple operating scenarios including evacuations of trains and stations.

Ahead of trial running, legacy signalling systems on NR’s Great Western Main Line and Great Eastern Main Line were fully integrated with the Elizabeth Line central section to form an operational railway ready for trains to run across the route. NR’s Romford Route Control Centre in east London is responsible for all trains which operate in the tunnels, which are equipped with CBTC.

Several new Elizabeth Line underground stations in the central area have been handed over to TfL by Crossrail Ltd, which is building the line. The latest and third station to be handed over is Tottenham Court Road following Farringdon in March and Custom House previously.

“Trial running of trains on the Elizabeth line is an incredibly significant moment,” says Mr Mark Wild, Crossrail chief executive. “It marks the moment when our focus shifts to commissioning of the new railway and it puts us firmly on the path to trial operations and ultimately the opening of the Elizabeth line.”