THE government of the Australian state of New South Wales announced this week that the first of four tunnel boring machines has begun excavating the twin 15km tunnels required for Sydney's North West Rail Link between Rouse Hill and Epping. 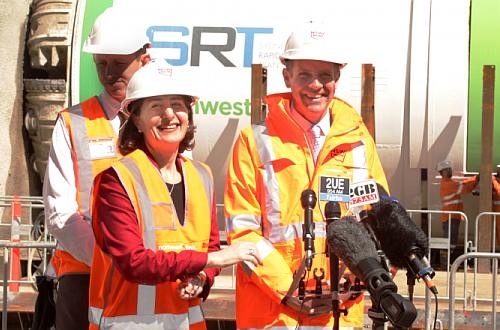 The 120m-long machine, dubbed Elizabeth, was built by French company NFM Technologies and has been assembled on site at the Bella Vista work site in New South Wales over the past seven weeks.

The tunnels will be bored at an average of 27m below the surface in rock that is mainly formed of abrasive sandstone, with the deepest point being 63m.

The four 6.99m diameter double-shield machines were ordered as part of the $A 1.15bn tunnelling contract awarded to the Thiess-John Holland-Dragados (TJHD) joint venture. A second TBM is due to be launched by the end of the year.

The fully-automated NWRL is due to open in 2019 and will form the first stage of the recently-announced Sydney Rapid Transit network.

"The New South Wales government has made it clear that if we receive a mandate next March, the Rapid Transit network will be extended through the city centre and west to Bankstown, giving public transport customers right across Sydney access to fast, reliable and modern turn-up-and-go services," says state premier Mr Mike Baird.