ACCIONA Construction completed the excavation works for Line 1 of Quito Metro on October 24, when the last of three tunnel boring machines (TBMs) reached the southern part of the Ecuadoran capital. 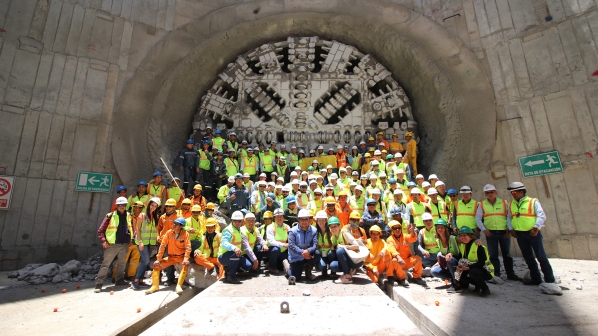 The TBMs, named La Guaragua, La Carolina and Luz de América, are more than 9m-tall and were used to excavate more than 19.5km of tunnel. Luz de América, which broke a world record after drilling 1489.5m in 30 days, excavated more than 9km from Solanda Station to the El Arbolito exit shaft while passing beneath the historical city centre without causing any damage to the city's World Heritage Site.

The Metropolitan District of Quito and Quito Metro announced on October 27 2015 that a consortium of Acciona, Spain, and Odebrecht, Brazil had been selected as preferred bidder for the $US 1.54bn main construction contract for the project.

Odebrecht subsequently pulled out of the project in May 2017 as it struggled to restructure its business in the wake of a $US 2.6bn fine imposed by a US court following a corruption scandal which also involved Brazil’s state-owned oil company Petrobras, leaving Acciona as the sole shareholder in the venture.

Construction began on January 19 2016, and the line is currently 75% complete with 14.9km of the 45km of track, and the foundations at 14 of the 15 stations already laid. The 22.9km line from Quitumbe to El Labrador is due to be completed by late 2019. CAF was awarded a contract in July 2016 to supply 18 1.5kV dc overhead trains for the line, with the first train delivered on September 6.