WORK on Line 1 of the Riyadh Metro took a significant step forward this week when the first tunnel boring machine (TBM), Mneefah, named after the horse of the founding King of Saudi Arabia, began its journey beneath the Saudi capital. 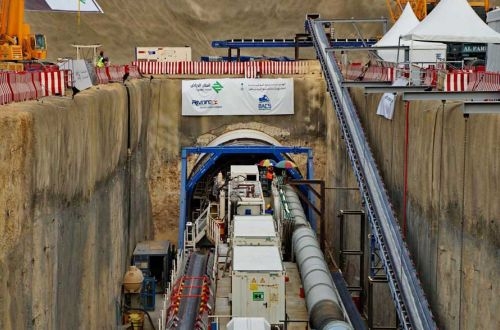 Mneefah will steadily ramp up to its planned average tunnelling rate of around 100m per week and it is expected to complete its journey by mid-2016. An additional six TBMs are required for the project, which involves the construction of more than 35km of tunnels beneath the city.

The Bacs consortium led by Bechtel, and including Aecom, Saudi company Almabani General Contractors, Middle East-based Consolidated Contractors Company, and Siemens, is responsible for design, construction, rolling stock, signalling, electrification and integration of Lines 1 and 2 of the network under a $US 9.45bn contract awarded by the Arriyadh Development Authority (ADA) in July 2013.

Work includes construction of 39 stations, two of which are key interchanges: Olaya Station, which is in the city centre at the intersection of Lines 1 and 2; and King Abdullah Financial District, which is located slightly to the north on Line 1.

ADA is aiming to open the first sections of the automated network in 2018 and complete the entire 176km, six-line project by the following year.

For more on Riyadh's ambitious metro project, see the March 2014 issue of IRJ, or click here.