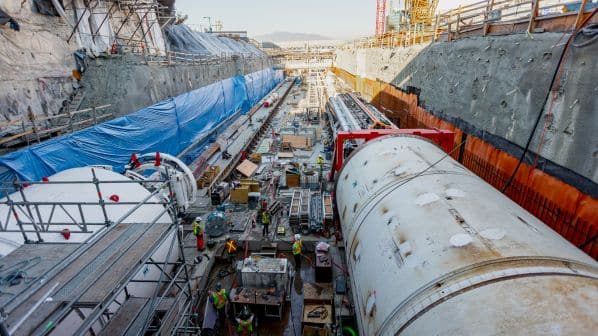 TUNNELLING has started on the Broadway Subway project in Vancouver, a 5.7km extension of the Millennium Line on the SkyTrain automated metro.

The Broadway Subway will run from VCC-Clark to Arbutus with five intermediate stations, including an interchange with the Canada Line at Broadway-City Hall.

The twin bores of the Broadway Subway are being excavated using two tunnel boring machines (TBMs). They will be launched separately from the site of the future Great Northern Way-Emily Carr station to undertake 5km drives to Cypress Street, near the future Arbutus station.

Each TBM is 6m in diameter and weighs 1000 tonnes. The first TBM will be launched shortly, with assembly underway on the second ahead of the start of work this winter. Each drive is expected to take 12 months to complete.

Preparatory work has included construction of a concrete base slab and the assembly of a conveyor system to handle spoil excavated by the TBMs. Lining rings for the twin tunnels have been manufactured off-site in Nanaimo.

Elsewhere on the route of the Broadway Subway, work is in progress on the elevated guideway and at station locations, including relocating utilities, building decks for road traffic and excavation.

Construction of the underground stations will begin when tunnel boring is completed. This will be followed by track laying and the installation of supporting systems, before testing and commissioning.

When completed, the journey time from VCC-Clark to Arbutus on the Broadway Subway will be 11 minutes, which will the save the average commuter almost 30 minutes a day.

The extension will also relieve traffic congestion in the Broadway corridor, home to the second-largest employment centre in British Columbia as well as healthcare facilities, an emerging innovation and research hub, and growing residential communities.

“Investments in public transit infrastructure enhance Canadian families’ quality of life, providing affordable means of moving around their communities and getting to work more comfortably and back home faster,” says Ms Joyce Murray, MP for Vancouver Quadra and minister of fisheries, oceans and the Canadian Coast Guard in the federal government.

“Our government is pleased to work with partners to expand the Broadway Line westward and create important opportunities for new communities, inclusive housing, and local businesses to flourish.”

“The Broadway Subway will be a game-changer for commuters on one of the busiest corridors in Metro Vancouver,” says Mr Kevin Quinn, CEO of Vancouver public transport operator TransLink.

“This major milestone brings us one step closer to opening a vital zero-emission rapid transit connection that will move approximately 150,000 people per day, reduce congestion and lower greenhouse gas emissions.”