MASS Rapid Transit of Thailand (MRTA) has confirmed that two consortiums have submitted bids for the public-private partnership (PPP) contracts for Bangkok’s Pink and Yellow line projects, both of which will be developed as monorails. 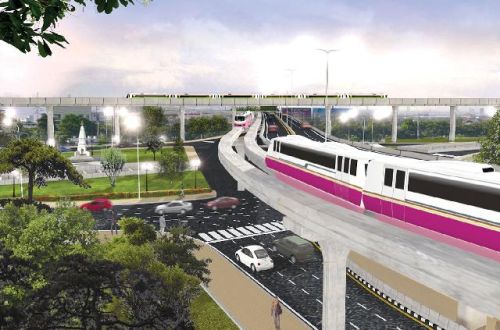 The 34.5km Pink Line runs from Khae Rai to Min Buri and is budgeted at Baht 53.5bn ($US 1.52bn), while the 30.4km Yellow Line is worth Baht 51.9bn and links Lat Phrao with Samrong. The winning bidders will invest in civil engineering, trains, operating systems, and maintenance services under a 30-year concession with both contracts lasting 33 years and three months to also cover the construction period. MRTA will cover land costs.

The two bidders are:

- the BSR joint venture comprising Ratchaburi Electricity Generating Holding, BTS Group Holding and Sino-Thai Engineering and Construction, and
- a joint venture of Bangkok Expressway and Metro Public Co (BEM), which already holds the concession to operate the MRT Blue and Purple lines, and would be responsible for operations, and Ch Karnchang, which would take responsibility for civil engineering.

MRTA governor Mr Peerayudh Singpatanakul says 16 prospective bidders expressed interest in the Pink Line and 17 in the Yellow Line but only the two bidders came forward for both projects. He says the bidding committee will take three months to consider the offers and that the contracts are expected to be signed in April 2017.