THE Chinese cities of Xuzhou and Guangzhou have opened new metro lines, with Xuzhou opening the initial section of Line 2, and Guangzhou inaugurating an extension to Line 8. 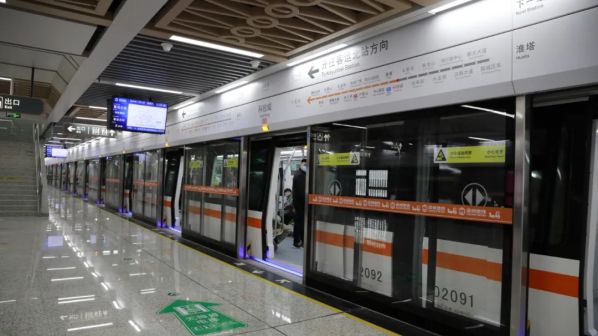 Xuzhou Metro opened the first 24.2km phase of its northwest-southeast Line 2 on November 28, after four years of work.

The underground line, which runs between North Passenger Station and Xincheng East, has 20 stations including an interchange with Line 1 at Pengcheng Plaza.

Further interchanges are planned with lines 3, 4, 5 , 6 and 7, which are currently in varying stages of planning or construction.

The line is electrified at 1.5kV dc, and services are operated using a fleet of six-section B-type trains manufactured by CRRC. The line offers a one-way end-to-end journey time of approximately 45 minutes, at an average speed of 32km/h.

Services will operate between 06.00 and 22.00 daily, with a peak time interval between trains of around 7min 30s, and an off-peak interval of 8min 45s.

Guangzhou opened a 16.3km extension to Line 8 between Cultural Park and Jiaoxin on November 26.

The 11-station extension nearly doubles the line in length to 33.9km and 26 stations, with an end-to-end journey time of around 57 minutes between Wanshengwai and Jiaoxin.

Two further stations on the new section are to open later, including interchanges with Line 5 at Xicun, and the under-construction Line 11 at Caihongqiao. The extension also includes a new depot at Baiyun Lake, near Tinggang.

With the new extension, daily ridership on Line 8 is initially projected to reach 960,000 passengers per day, growing to 1.65 million per day in the longer term.

A further northern extension across the Liuxi river to Fengxiang Lu has been approved to begin construction before 2023.

Line 8 is operated using a fleet of 80km/h six-car A-type trains built by CRRC, and is electrified at 1.5kV dc.