IRJ at UITP 2015, Milan. Sir Peter Hendy, who has completed his two-year term as UITP president handed over to his successor Mr Masaki Ogata at the closing ceremony of the 2015 congress. 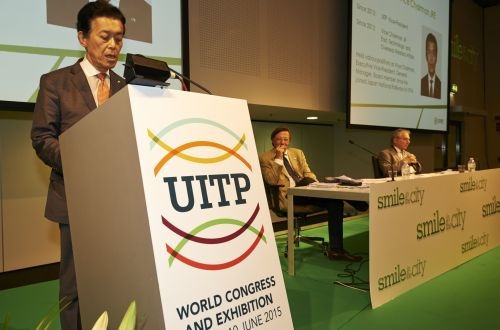 Ogata, who was elected unanimously by UITP members, is the first UITP president from Asia and only the second non-European to hold the position in the association's 130 year history. Ogata has been UITP vice-president since 2013 and vice-chairman of JR East since 2012. "I have spent 41 years on the railway so it is time to make my contribution to worldwide public transport," Ogata told IRJ in Milan.

Before stepping down, Sir Peter said the public transport sector is expected to do more with less. "It's the rallying cry of our time," he told delegates. "We can call on decision makers to give us more support, but ultimately, we have to pry ourselves away from depending too much on public funds. We have to find new models to pay for public transport, and talking constantly with the business community is going to be vital."

The Milan congress was attended by more than 2200 delegates and 280 exhibitors. The next congress will take place in Montreal, Canada, in 2017 under a new name: the Global Public Transport Summit.