WIENER Linien, which operates urban rail services in the Austrian capital, inaugurated a 4.2km extension to Line U2 of the Vienna U-Bahn on October 5. 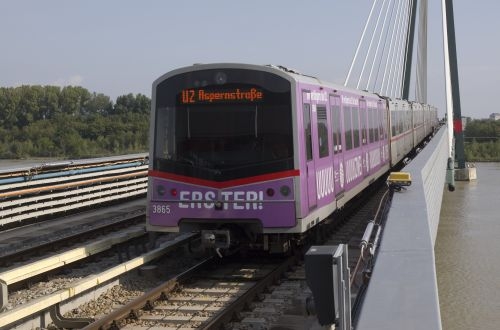 The €360m extension runs from the existing terminus at Aspernstrasse and includes three new stations at Hausfeldstrasse, Aspern, and Seestadt with a fourth station planned in the longer term. Alternate trains are running north of Aspernstrasse as population density is quite low at present until a new housing scheme has been completed at Seestadt.

The extension connects with Austrian Federal Railways (ÖBB) services at Hausfeldstrasse, which is also the terminus of a €68m 4.6km tram extension from Kagranerplatz which opened on the same day. The tram extension includes a bridge with a station which has an island platform. As Vienna trams only have doors on one side, trams have to switch to left-hand running to enable passenger to board and alight at this station.

Wiener Linien is currently extending Line U1 to Oberlaa, while it has yet to decide whether to give priority to an extension to Line U2 to Gudrunstrasse or build Line U5.