VIENNA celebrated the opening of a 4.6km extension of U-Bahn Line U1 on September 2 when a host of local dignitaries riding on the first train from Reumannplatz to the line’s new southern terminus at Oberlaa. 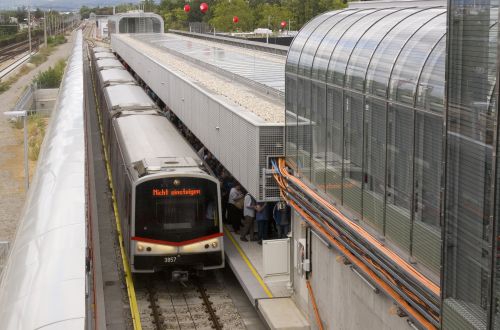 The €600m project has added five stations at Troststraße, Altes Landgut, Alaudagasse, Neulaa and Oberlaa with the line running in tunnel between Reumannplatz and Alaudagasse, and at-grade to Oberlaa. A small depot has also been built at Oberlaa to accommodate the additional rolling stock required for the expanded service.

Among the politicians who rode the first train were Vienna mayor Mr Michael Häupl, and city councillors Ms Renate Brauner, Ms Maria Vassilakou, and Ms Ulrike Silma. They were greeted by a loudspeaker announcement by Austrian chancellor Mr Christian Kern.

Trains will run at a minimum headway of 2.5 minutes at peak times with every second train travelling beyond to Alaudagasse due to reduced demand.

With a total length of 19.2 km Line U1 is now the longest metro line operated by Wiener Linien. As a result of the opening, tram Line 67 has been reduced to operate only the Otto - Probst - Platz - Reumannplatz section. The local bus network has also been readjusted to feed the new metro stations.