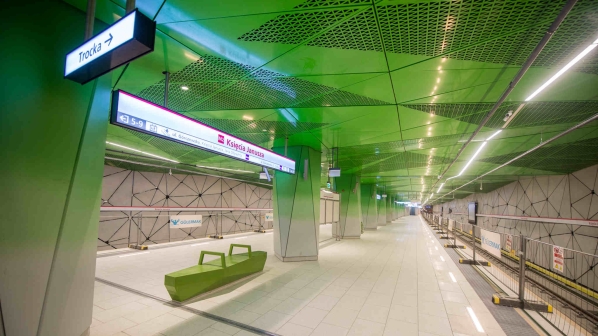 The new stations are located at Płock, Młynów and Ksiecia Janusza. Line M2 now has an end to end journey time of 20 minutes.

While praising the opening of the extension, Warsaw city mayor, Mr Rafał Trzaskowski, asked for citizens to refrain from travelling on the new line during the coronavirus pandemic. “I appeal to Warsaw residents for common sense,” he says. “I am asking everyone who would like to see the new underground stops, to stay at home. When the epidemic is over, there will definitely be a better time.”

The section was built by Gülermak Ağir Industry Construction and Contracting under a Zlotys 1.1bn ($US 272m) contract, with 75% of the project funded by the European Union through the Cohesion Fund under the Operational Programme Infrastructure and Environment 2014-2020.

The section includes twin 3.4km tunnels, with the stations and tunnels an average of 15m below ground.

The initial 6.1km section of Line M2 between Rondo Daszyńskiego and Dworzec Wileński opened in March 2015, followed by the opening of the 3.1km eastern section from Dworzec Wileński to Trocka in September 2019.