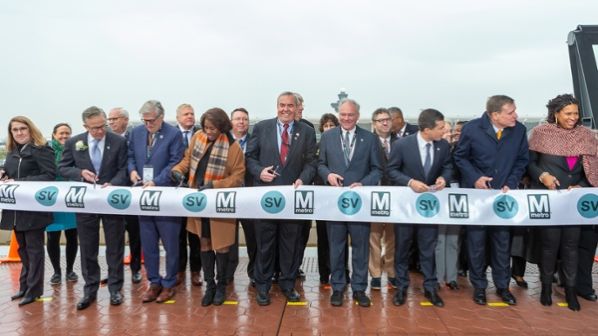 The opening ceremony for the extension took place on November 15.
Photo Credit: MWAA

The opening to Dulles International Airport and Ashburn marks the completion of Phase 2 of the Dulles Corridor Metrorail project, which has been undertaken by the Metropolitan Washington Airports Authority (MWAA).

MWAA says that a rail connection between Dulles and the centre of Washington DC has been planned since the airport opened in 1962.

Construction of Phase 2 began in 2014 under a design-build contract awarded to the Capital Rail Constructors joint venture of Clark Construction Group and Kiewit Infrastructure South. The contract included systems, track and stations.

A rolling stock maintenance facility has been built on Dulles Airport property by Hensel Phelps under $US 253m contract awarded by MWAA on August 4 2014.

Construction of Phase 2 has been completed four years late and $US 250m over budget, according to The Washington Post.

MWAA says that it now looks forward to “ongoing positive economic impacts” along the length of the Dulles Corridor, including further transit-oriented development as has taken place in Tysons and East Reston following the completion of Phase 1.

“The completion of the Silver Line means a better, greener more affordable way to get to work, school, shopping, entertainment and events, as well as easy access to Washington Dulles International Airport, a gateway to the world,” says WMATA general manager and CEO, Mr Randy Clarke.

“As one of the largest construction projects in the United States, the Silver Line provides high-quality, high-capacity transit service.”